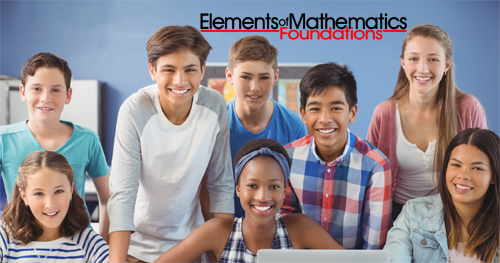 The Institute for Mathematics and Computer Science (IMACS) is thrilled to announce that the Elements of Mathematics: Foundations (EMF) online program for talented middle school students is now complete with the release of the 18th and final EMF course, Precalculus Coda.

Precalculus Coda brings together topics from earlier EMF courses and expands on them with an extensive study of vectors in the real number plane and space, linear transformations (including orthogonal mappings), and matrices and their application in solving systems of equations.

Upon successful completion of the EMF program, students will have covered all national and state math standards for pre-algebra through precalculus but from an entirely modern mathematical approach. In addition, they will have enjoyed thorough introductions to college-level topics such as Abstract Algebra, Logic, Set Theory, Number Theory and Topology, and be well-prepared to excel in a college-level Calculus course.

Why Modern Mathematics
Mathematically talented students typically master school math with little effort. As a result, they tend to become bored with and disengaged from math if limited to traditional curriclum. They may also fail to develop the mental resiliency and study skills that come with having to work hard at math problems designed for their ability level.

The EMF curriculum is designed specifically to engage young, gifted thinkers in ways typically reserved for university math majors. It is useful to distinguish the two ways in which EMF is college-level: (1) the sophisticated use of logic and reasoning via proofs, and (2) the introduction of modern areas of mathematics such as Topology.

EMF incorporates all the concepts from a traditional curriculum but uses a logic and proof-based approach not usually entrusted to students until college. Talented middle school students who are intellectually mature and motivated can benefit from this more sophisticated approach; it fosters the development of creative thinking skills that are not easily replaced by computer processing power as algebraic manipulation skills already have. In other words, EMF prepares students with skills for the future, not skills of the past.

EMF's incorporation of exciting topics in modern mathematics—topics ignored by traditional school math—makes it far more interesting and intellectually engaging. These topics represent areas of active research as opposed to traditional school math subjects that were understood completely by the late 17th century. The idea of cutting off a child’s education in literature, history or science at the 17th century is ludicrous. The same applies to mathematics.

Access Matters
For children in many parts of the US and around the world, EMF now fulfills the promise of opening up access to a comprehensive, unified, proof-based approach to modern mathematics. IMACS certainly believes in the value of talented and dedicated teachers, but we also believe that lack of access to such teachers has unfairly limited for too many bright students the right to be challenged at their ability level on the way to achieving their full potential in mathematics. We aim to change that with EMF.

EMF in Schools
Did you know that numerous districts, schools and after-school programs license EMF? In fact, the first cohort of EMF students in Broward County Public Schools, Florida completed the program last year. As a result, many of them will be enrolling in Calculus as 9th graders this fall. If you would like to see EMF offered in your school, share the EMFmath.com/schools website with the relevant decision-makers in your district.

Comments Off on EMF Math For Talented Middle School Students is Complete!