This month, IMACS chats with alumnus Daniel “Danny” Vidaud. Danny started taking IMACS math enrichment classes as an elementary school student and progressed through the introductory computer science class. He went on to earn his B.S.E. in Aerospace Engineering from the University of Michigan. Danny is currently in his third year as an engineer with Boeing. 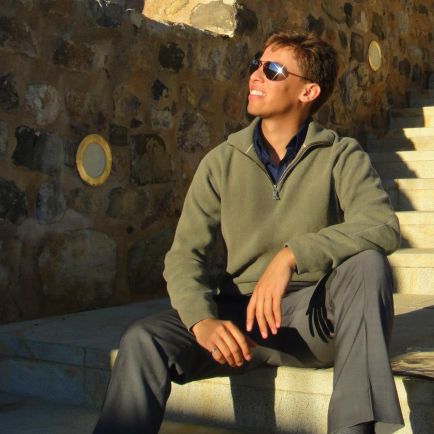 Tell us about your current position at Boeing. What exactly do you do?

I am an aerodynamics engineer working in technology and product development. In a nut shell, I am part of the team of architects for the external shaping of future commercial jet airplanes. We spend our time sketching up new, outside-the-box ideas and bringing them to life!

I was a very intuitive child. Very not normal. Constantly absorbing as much as I could about the world around me. I had a tendency to quickly gain a functional understanding of complex ideas. The downside was that this only applied to topics I found interesting. A repetitive spelling assignment, for example, was as interesting to me as watching paint dry in an empty room with no windows. I needed to actively seek ways to challenge my inspiration or I would inevitably fall into a state of no motivation.

I enjoyed music. The piano, I found, was quite versatile at conveying a variety of musical ideas, but I hated studying it. I couldn’t stand the classical books or the structured process. The musical expression was inspiring; the structured training was not. Instead, I decided that mimicking what I heard on the radio was inspiring enough to practice for hours on end. Free improvisation and jazz composition became the new method of study.

Computer games! Fun! Not so fun when they freeze and get choppy, right? So I decided it would be interesting to develop a theory on what made a computer “fast” or “slow” and subsequently exploit that theory to help others in creating new systems or maintaining their old systems to do what they needed them to do.

Physics and all other things I found interesting went along the same lines of thought. The approach was always the same: Take a complicated problem, gain a general intuitive understanding for how it works, then generate as many permutations or original ideas as possible.

Did you know from a young age that you wanted to be an engineer?

Always. I didn’t always know it was called engineering though. I just knew that I liked asking the “Why not?” question a lot. “Why can’t we do something like this?” Challenging the normal. Being weird. It just seemed like more fun to not do what everyone else was doing.

Given that, rocket science seemed like a viable candidate. No one was doing it, everyone said it was impossible, and it seemed like it might be a good place to start if I wanted to get involved in something really complicated that may have high demand and low supply. So I turned 15, applied with a pre-declared major of Aerospace Engineering to the University of Michigan, a few years later developed a powerful network of friends, and then came to work for Boeing in the heart of its commercial think-tank.

How did your IMACS classes prepare you for college? Your position at Boeing?

The teaching philosophy for computer programming at IMACS is not the classical piano book approach. You will not become an expert at solving any kind of existing, well-defined problem with one specific and popular language. You’ll spend a lot of time not learning the computer language that you will be taught in your first term in college.

Instead, you will gather an understanding of what you might call “computer linguistics”. The ability to communicate an idea through the assembly of conceptual components. The skill of decomposing a multipart task into a simple abstract algorithm. At which point you are then free to cut code in the language that would be most efficient for communicating that idea. IMACS computer science provides you with a different way of thinking, not just an add-on to your résumé about how you can write code in an industry favorite language.

At Boeing, we spend time studying new functional aerodynamic shapes to solve a variety of complex problems while keeping in mind the multidisciplinary nature of every component. With every new idea, you walk through the development process to show that it’s viable, or even patentable. Some of the skills I learned at IMACS allow me to draft up a few quick and dirty scripts in languages I had never coded in before. This allows me to save a significant amount of time repeating similar analytical tasks on multiple candidate solutions or parsing out test data in a useful way. After IMACS, you become more comfortable interacting with the machine and make the most of the computational power you have available at your disposal.

You also have some experience teaching. What do you think the US has to do as a nation to improve math, science and computer science education?

I was a substitute teacher at a high school and subsequently a graduate teaching assistant in a first-year programming course for future engineers at Purdue University.

Successful college students today are very aware of the concept of perceived economic value. Students today are more likely to seek out business-related, social science or history degrees rather than physical science or engineering degrees. It demonstrates a general sentiment that the technical degrees are no longer worth their perceived cost (years and/or intensity of training, accrued financial burden, etc.). Science is not the “cool” thing to do anymore as it once was when scientists were in the limelight of the 60’s. The perceived benefit of being in a technical field was much higher. Marketing happened by default on the news every time a rocket launched at the NASA Kennedy Space Center. Unfortunately, the need for technical degrees is inherently difficult to quantify and isn’t always obvious at a cultural or global economic level anymore.

Today, we’ve come to take for granted the engineering and scientific leaps that have been made in the recent past, such as leaps in wireless data transfer, functional nanotechnology and intuitive human/machine interfaces. Advances in biotechnology research (e.g. replacement organs, spray on skin) have unlocked a new approach for healing the infirm.

Unless the general culture regains an appreciation for scientific exploration by raising the perceived benefits and reducing the perceived cost (as was once shown in the 60’s during the Space Race, or during WWI and WWII in aircraft and military weaponry development, or personal computer development in the late 80’s), we will see a general stagnation in “technological advancement” as it has been traditionally defined.

Traditionally defined innovation and scientific exploration is a high-risk, high-expense endeavor. It will only happen when the global market demands it and demonstrates its true value. When the free market price of oil is allowed to inflate beyond the point of affordability without manipulation, the economy will require immediate and immense creativity in alternative energy and fuel technology. The need for scientists and engineers will be made immediately relevant and the market support will demonstrate the true benefit to all who depend on that which they take for granted.

The traditional ambition within transportation advances, for example, in the past century has repeatedly contained the adjectives “faster, farther, higher”. On the ground we went from conventional rail to high-speed rail (e.g. France’s TGV) to magnetically levitated trains (e.g. Japan’s MLX01). In the air we’ve seen US Air Force-funded demonstrators like the Boeing X-51 flying multiple times the speed of sound over the Pacific Ocean.

It seems the general population is now fairly uninterested in the traditional. We are no longer actively pursuing this long-established goal. In a modern culture that is approaching one of perfect information (made possible, in part, by economically accessible, internet-enabled, naturally intuitive smartphones), we have the ability to make more rational purchasing decisions. Now the market tends to instantly reward those who can make a substitute product for a cheaper price. Engineering and science is being redirected to the practical. For example, after you pick your destination, travel websites will automatically sort by price. The name of the game now isn’t “faster, farther, higher” anymore. The commercial business case is just not there for it.

Social awareness is starting to flow into the demand for science and engineering. Privatized venture philanthropy and private humanitarian and community foundation efforts have created a multi-billion dollar industry in the past 10 years. Modern innovation is making commodities such as digitally-based financial services for the poor or basic health services available to the masses that were previously prohibitively expensive.

Science, Technology, Engineering and Mathematics are here to make the world a better place. How we each define “better” will guide innovation and large private capital into the directions that have highest economical demand and true value. The only thing we can do now is try to show the world what we are capable of accomplishing and what they can do as the culture begins to appreciate, once again, how powerful ideas really are.