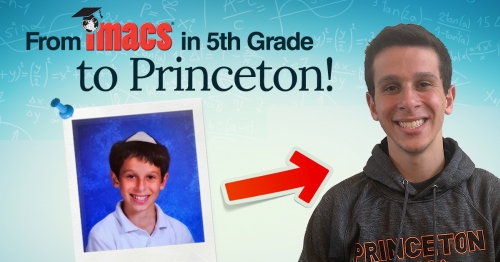 Congratulations to IMACS graduate Ty Kay who is beginning his studies at Princeton.

Ty started taking IMACS Math Enrichment classes in 5th grade and went on to complete IMACS’ university-level courses in Computer Science and Logic for Mathematics. Ty cultivated a love for problem-solving and analytical thinking in high school, greatly enjoying AP Mathematics and Physics courses while applying those skills to creative outlets such as the advanced study of the Talmud (Jewish Oral Law).

As a student-athlete, Ty was a leader in the classroom and on the field. He and his teammates won the Technion’s 2017 Rube Goldberg Machine Challenge, an international competition, for which they were awarded one-year full scholarships. Ty’s pioneering performance in an independent course on Multivariable Calculus led his high school to establish a program allowing highly advanced students to study this challenging subject. A varsity soccer player for four years, Ty won MVP honors in 11th and 12th grade and was named a captain of the team in his senior year.

Ty was accepted early decision to Princeton University where he will major in Operations Research and Financial Engineering after taking a gap year to study abroad.

“IMACS taught me to simultaneously think critically and creatively, imbuing me with skills that assisted me throughout high school and played a fundamental role in my decision to pursue data analysis at Princeton University.â€