There’s No Escaping the Elements
(of Mathematics)

This month’s guest blog post comes from Christopher Tiwald. Christopher studied the Elements of Mathematics curriculum from 6th to 9th grade as a student in Lincoln Public Schools in Lincoln, Nebraska. He attended the University of Nebraska-Lincoln where he majored in Political Science. After exploring a diverse series of careers, Christopher became a self-taught software engineer and now works at Conductor, Inc. as a Technical Operations Engineer. 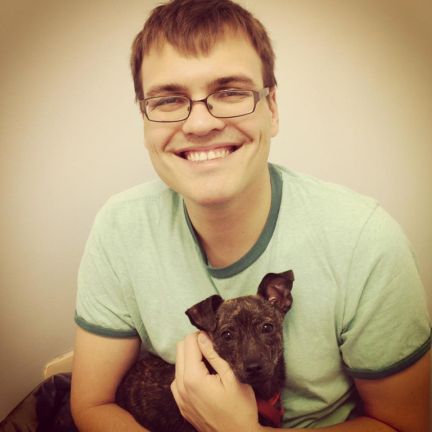 Elements of Mathematics alumnus, Christopher Tiwald,
spends time with one of his dogs, whose name is Bronx.

The most common complaint you hear from students in math class is “We won’t use this in the real world.” I’m ten years out of high school and six years out of college. I’ve made sandwiches professionally, waxed floors full-time, went to grad school, dropped out of grad school, and worked in professional politics. I can honestly report, “We were wrong.”

It turns out the real world doesn’t reward education as much as passion, self-starting, and the ability to solve problems. The Elements of Mathematics curriculum, or “Elements” as we called it in school, taught me how to learn. For four years I studied problems that bent my brain and stretched my imagination. They required every last modicum of creativity I could muster and, in truth, I wasn’t terribly good at them. I didn’t graduate top of my class — nowhere close. When I did graduate I vowed, “Never again”, and studied liberal arts instead of science in college.

But I couldn’t escape the Elements of Mathematics. Freshman Philosophy is a breeze when you’ve tackled deductive number theory. Supply and demand are trivial when you recognize their curves as simultaneous equations. College grades are driven less by raw IQ than they are by pattern recognition. Once you know how to solve one class of problems, it’s easier to solve again and again. It’s like the compound interest of education — compound interest, of course, being a concept I first encountered in Elements.

I thought it would stop when I finished college. Surely the real world, crammed full of unqualified positions, internships, and the entry-level, would not echo the Elements of Mathematics?

Did you know that if you have five ingredients to make a sandwich, the number of sandwiches you can make with two ingredients is exactly equal to the number you can make with three? Have you ever canvassed door-to-door for a campaign? The most efficient way to knock doors is often an Euler circuit — a route that takes you down every street exactly once. Here’s a fun one from the economist Thomas Schelling: Ski resorts are a closed mathematical system. The amount of time it takes to sit on the lift and wait in its line are inversely dependent. If you make the lift faster, you make its lines longer, because the time people take to ski down the mountain or warm up in the lodge won’t change.

You don’t need to know these things to run a sub shop, win an election, or enjoy a winter vacation, but knowing them gives you a more thorough, practical understanding of the world, one that is immediately useful to employers and in daily life. You learn new concepts quickly because you learned how to learn. You solve problems more efficiently because you’ve solved thousands of similar problems before. The Elements of Mathematics is a competitive edge without qualification. Bosses love it as much as professors.

As for me, I wouldn’t be who I am without the program. Elements changed the way I interact with the world. After wandering from career to career, I landed comfortably in software engineering, something I taught myself. That says less about me than it does my education. All jobs are strings of solvable problems. Once you’ve learned how to think, the rest is easy.

To learn more about the online version of the curriculum that Christopher studied, explore IMACS’ foundational mathematics courses at www.elementsofmathematics.com and our mathematical logic courses at www.eimacs.com. Get weekly IMACS logic puzzles on Facebook.