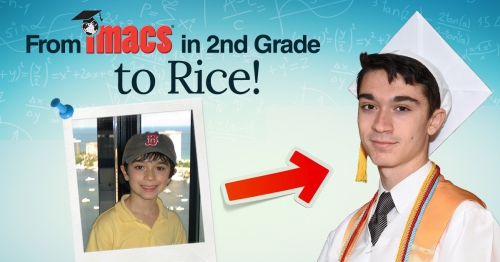 Congratulations to IMACS graduate Ricky Morse who is beginning his studies at Rice.

Ricky first attended IMACS in 2nd grade. Over the next 10 years he completed all levels of Math Enrichment and Computer Enrichment, Electronics, and university-level classes in Computer Science and Logic for Mathematics. Having scored 1580 on the SAT, 35 on the ACT, 800 on the SAT II subject tests in Math and Chemistry, and 5’s on AP exams in Calculus AB, Calculus BC and Chemistry, Ricky was named a National Merit Finalist and National AP Scholar.

During high school, Ricky channeled his talents and sharp focus through both academic and athletic endeavors. He qualified for the prestigious American Invitational Mathematics Examination, and he and his teammates competed in the Barry University Olympiad tournaments, earning 1st place team wins in Math and Chemistry. Ricky also works on developing ways to use computer programming to enhance research, as well as striving to improve his personal best times in track and cross-country.

Ricky was accepted at Rice University, University of Florida, University of Miami with a Singer Scholarship, and University of Southern California with a Presidential Scholarship. He chose Rice where he will major in Computational and Applied Mathematics followed by a Ph.D. and career in research.

“Taking IMACS classes from a young age gave me a clear advantage in math and computer science, but it also helped me excel in all other fields. I am able to approach complex problems with confidence because of what I learned at IMACS.”