Laying the Foundation With Logic 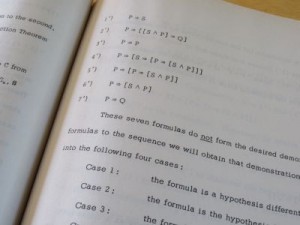 Why do we bother teaching children their ABC’s when they are so young? It’s not as if they are going to write the next Gettysburg Address once they know the difference between b and d. Why do piano teachers spend so much time with their beginning students on proper finger placement? It’s not like they are going to compose a symphony once they know that a treble clef means play these notes with your right hand. So why does IMACS start students off with an introduction to logic course? It’s not as though they’re going to solve the twin prime conjecture once they know the difference between modus ponens and modus tollens.

Now before you leave a comment about why that’s not a perfect analogy, you’re right. The point was to push your thinking in that direction before you think about this: Why do we use an exaggerated voice when talking to a baby that doesn’t yet understand words? Why do we toss off aphorisms to small children who don’t have the life experience to know what they mean? (Here’s a fun list if you want to practice sounding clever and wise.) It’s because when a growing brain comes to understand the nuances of tone, the subtleties of language, the connotations beyond the denotations, then and only then can its potential be realized as the developed brain of a novelist, journalist, and yes, even blogger unleashing the full power of human communication. Now, it’s a long time between teething and typing away at the next great idea. But parents still talk to their kids in these ways because they understand, if only subconsciously, that it’s part of teaching children how to express themselves effectively in adulthood. That’s likely how their own parents spoke, and so it’s very familiar.

Formal logic, on the other hand, is not as familiar. So the question naturally arises, “Why spend so much time teaching it when all I’m looking for are advanced classes for gifted and talented students?” For those who go on to major in math or computer science at college, the benefits of taking logic courses are obvious. They will be expected to write complicated proofs or programs that are logically coherent. If they choose these fields as professions, their ability to make a living (and stop mooching off of you) will largely depend on their ability to do this really well. And just as with teaching the skills that lead to great story-writing, you don’t start when the kid is already in college. By then, you want your college student to already have these tools so he can blow away the curve and make you so proud that you will not stress when he goes on his first spring break trip where there will be no mischief whatsoever. You start earlier by first teaching them how to craft a well formed and logically consistent argument, and then you layer on the advanced courses that require this fundamental skill in order to be successful.

But what about students who are not going into math or CS? Well, are there any future philosophy majors out there? How about pre-law? Wouldn’t you know it, they too will need the ability to make logically coherent arguments in their coursework, whether it’s debating the forms of Plato or taking the opposite side of a Supreme Court decision. Speaking of debate, we’ve had a number of high school students tell us that their logic skills helped them to excel in debate class. Come to think of it, if your child plans to be in a position where she needs to think about ideas in an orderly fashion, connect pieces of information together, draw conclusions from her analysis, and present her argument for scrutiny, understanding logic would be a huge advantage. Someone stop me now before I break out into “I’d like to teach the world a proof…”

Do you have a story about a situation in which understanding logic helped you? Leave it in a comment below.

One response to “Laying the Foundation With Logic”