Girls and Women in Science: One 20-year Perspective 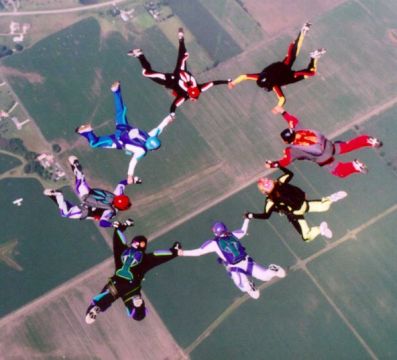 Prof. Margaret Kosal (at 7 o’clock position in black, purple, and teal jumpsuit) takes her 799th jump as part of an all-female group of skydivers.

Margaret E. Kosal is an assistant professor in the Sam Nunn School of International Affairs at Georgia Tech. She earned her Ph.D. in chemistry at the University of Illinois-Urbana-Champaign and her B.S. in chemistry at the University of Southern California. During graduate school, Prof. Kosal co-founded a high-tech start-up company that developed sensors to detect explosives, chemical weapons, and biological weapons. She was a Science Fellow in the Center for International Security and Cooperation at Stanford University and served as Science and Technology Advisor in the Defense Department. Prof. Kosal’s research explores two interrelated areas: weapons of mass destruction (WMD) and emerging technologies.

I was asked to write a perspective on girls and women in science – what I’ve seen change in the years since I was a girl interested in science, what I see now as a professor and role model for up-and-coming students (both male and female), and what still needs to change. The observations and stories below reflect my experience as a small-town girl from the rural Midwest who went to a big city on the West Coast for college, who served in the Pentagon, and who currently teaches at a major research university in the South.

This year was the twentieth anniversary of my graduation from high school, so reflection seems apt. When I graduated high school, I knew that I wanted to study the physical sciences. I loved chemistry, physics, and astronomy. I loved the idea of understanding and being able someday to push the boundaries of knowledge myself. For me, pursuing science was about discovery, exploration, and understanding how the Universe worked. Math and science were ‘hard.’ I liked the challenge; I wanted to be challenged.

The Importance of Good Teachers

It didn’t take 20 years ago for me to realize the importance of teachers to students’ success, especially fostering and supporting girls’ interest in science and math. As much now as they were then, high school teachers are essential to sustaining US capacity in science and technology and even more crucial for encouraging girls in the sciences and mathematics. I suspect that all the girls in my high school felt the subtle social cues (or explicit comments) dissuading us from actively pursuing and excelling in science. Every scientist we learned about, every constant, every equation – if it had a name, it was that of a man. We noticed as young girls in science that there didn’t seem to be a place for women in science. I was fortunate to have very good teachers overall, but my chemistry teacher specifically deserves recognition. Girls, just as much as the boys, were called on and encouraged to contribute to discussions, to actively engage in hands-on lab experiments, and to lead in the demonstrations that we organized at local elementary schools. He spoke plainly and openly about issues of equity with respect to representation and participation in the classroom. What we may not have been able to articulate as teenagers, he validated. He made it a normal rather than an exceptional part of the conversation: girls were good in science and were expected to participate actively. It just was; it wasn’t special. The standards were the same regardless of gender, and we each had a fair shot to succeed or to fail.

In today’s era of backlash and hyper-criticism of teachers, I’m not sure that a teacher, especially a young one, could do that. At the same time teachers like my high school chemistry teacher are needed more than ever now. I am concerned greatly about the increasing disincentives and hostility toward schoolteachers that has punctuated US domestic politics this year. That is a significant change from just ten years ago. Because much of what affects schools happens at the local level, parents can truly have an impact in their own districts. I encourage all parents to write letters to their local newspapers and blogs and to attend school board meetings. Be a voice in support of the teachers who will have an impact on your children’s future.

As an undergraduate student, something my research advisor told me still rings true to this day. At the time, he had been supervising graduate students and post docs for more than 20 years. He noticed that when experiments fail, female students blamed themselves. On the other hand, he observed that the male students almost always attributed failure or negative results to the experiment, to the equipment, to the reagents, etc. While my own students aren’t doing experimental chemistry, I still see the same patterns in some of them almost 20 years later. Some of the best and most conscientious female students in my research group do this. I make a point to alert them to this behavior, and sometimes that’s enough to be effective. I also gently remind them to stop apologizing for successes or failures, and when things don’t work out, to see those situations as learning opportunities.

This likely isn’t a phenomenon that starts in college. Girls (and boys) need opportunities to risk intellectually, to fail, and to acquire the skills to deal with the consequences. As one of my favorite posters from the Materials Research Society starts “Science: If you’re not making mistakes, you’re doing it wrong;” failure is part of basic research in the sciences and engineering. A recent study written up in the New York Times, “Can A Playground Be Too Safe?“, discusses how increasing efforts aimed at eliminating physical risk on playgrounds were seen to impact emotional development negatively in a broader context, as well as making playgrounds boring for kids. For much longer, girls have been insulated from or socially prompted to avoid outright that kind of physical behavior and risk. My recommendation: more rock climbing, camping, soccer, and skateboarding for girls (and boys)!

Mentoring Can Make a Difference

As an undergraduate and as a young graduate student, I did not receive informal guidance or mentoring in the process of navigating grad school, including the admissions process, nor in understanding what being a professional scientist entailed. I didn’t realize this omission then, but I obviously found my way on my own to some extent. While very few would describe me as passive or timid, I’m not sure that I would have known how to ask for such guidance. For me, those experiences and lessons learned likely contributed to my independent initiative. At the same time, I wonder how much further I might be in my career had I had the informal or formal mentoring that many of male peers received. I don’t see this lack of mentoring as having changed all that much either. If universities would more publicly and formally support mentorships and if more professors reached out proactively to offer guidance, all students and the science and engineering disciplines as a whole would benefit.

US Moving in the Right Direction

On a wider level, I’ve observed greater recognition of the increasing need for American students to pursue studies in science, technology, engineering, and math (STEM) fields (e.g., the National Academy of Sciences 2005 report “Rising Above the Gathering Storm“). Over the last 30-plus years, efforts to encourage women and minorities to pursue science and mathematics have been supported and established by federal agencies like the National Science Foundation, by national-level private organizations like the American Association of University Women, and by others such as the organization MentorNet. Those models for getting girls and minorities to pursue STEM fields should be explored for general application to the US population.

The skills that I learned, whether I knew it or not, while being a female chemistry student and as a young female PhD scientist, have helped me in all of my pursuits, whether while serving as Science and Technology Advisor in the Pentagon or while organizing skydiving jumps. That definitely hasn’t changed. They’ve all required robust analytical problem-solving and independent initiative, and each time, the majority of my colleagues have been male. Some may think of this as having some special skill set that allows me to be a successful woman in a “man’s world,” but that mistakenly focuses on my gender instead of my abilities. I really look at myself as having developed the skills to succeed now and in the future where science and math abilities, combined with good old-fashioned drive and ingenuity, are critical to any person’s success.

I’m an innate optimist, and what I think has changed most definitely for the positive is the attitude and assumptions of girls today. While there is certainly no shortage of vacuous pop culture in these first decades of 21st Century, the options for girls and women continue to expand. There are more women leaders serving as public role models, and this is a very good thing for girls today and for the nation overall.

For more information on ways to keep girls interested in STEM subjects, read the prior blog post from IMACS.

IMACS empowers talented girls and boys to reach their full potential. To find out which IMACS class is right for you, take our free aptitude test.

2 responses to “Girls and Women in Science: One 20-year Perspective”