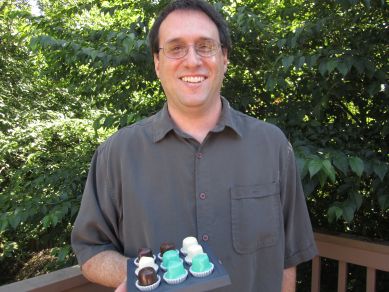 IMACS alumnus, Mark Engelberg, with Chocolate Fix, one of several games he has designed.

This week, IMACS catches up with an old friend, Mark Engelberg. Mark was part of the inaugural class of Project MEGSSS students in Broward County, Florida, when that program began in 1983. MEGSSS (Mathematics Education for Gifted Secondary School Students) was an ambitious public school course of study with a curriculum designed specifically for the brightest math students. The Broward program became IMACS in 1993. Like many of his fellow MEGSSS/IMACS alumni, Mark went on to an accomplished career in a STEM-related field. He is known for having designed the bestselling logic game, Chocolate Fix, as well as adding thousands of new challenges to the popular Rush Hour game.

How did Chocolate Fix evolve from an idea to a bestselling game to the basis for a new logic curriculum?

Chocolate Fix started out as a product called Gridworks. Gridworks was my first collaboration with ThinkFun, and its creation was very much a team effort. Bill Ritchie, the CEO of ThinkFun, had the initial inspiration to build a visual logic puzzle system. I proposed the pattern-matching framework for the clues and made the case that such a system would be simple, elegant, and expressive. Two very brilliant and prolific puzzle designers, Serhiy Grabarchuk Jr. and Scott Kim, ran with the idea and came up with the initial book of 60 puzzles. And of course, ThinkFun’s excellent artists and graphic designers came up with the product’s look and feel. It was a real thrill to work with so many talented individuals.

The funny thing, looking back, is that at the time, we weren’t entirely certain whether such a clue system would be rich enough to create challenging and interesting puzzles. Yet nearly a decade later, we haven’t even come close to exhausting Chocolate Fix’s potential; we’re constantly discovering clever new types of puzzles that can be expressed within the system.

Meanwhile, Chocolate Fix received the Parents’ Choice Gold Award in 2008, and in 2010, the Bunge Lab at UC Berkeley published a study that named Chocolate Fix as one of a handful of puzzle games that were shown to increase IQ. We know of at least one geometry teacher who has successfully used Chocolate Fix to teach his students the skill of constructing mathematical proofs. This is all exciting stuff, and it looks like Chocolate Fix has a bright future. Right now, we’re looking at ways to combine all the things we’ve learned about Chocolate Fix and turn it into an actual curriculum for teaching logic, problem solving, and mathematical proof skills.

You were also instrumental in using technology to develop thousands of new challenges for the Rush Hour app when the initial thought was that all the “good” challenges were gone. What are your thoughts on how technology continues to affect how we play games?

Technology touches every facet of our lives, and games are no exception. Computer games, for example, now form one of the largest segments of the entertainment industry. Even when it comes to non-electronic games and puzzles, computers play an important role behind the scenes. Nearly every crossword puzzle and sudoku are created these days with the assistance of computers. Artificial intelligence programs continue to shed new light on strategies for the world’s deepest games, including Chess, Go, and Poker. So to me, it seemed perfectly natural to apply my programming skills to the task of creating fresh new Rush Hour challenges.

You are the inventor of two other games – Animalogic and Snorkels. Tell us about them.

Animalogic received the Parents’ Choice Gold Award in 2009. Like Chocolate Fix, it is a solitaire puzzle system that comes with a book of challenges. The premise is that you have to successfully get 16 colored animals across a river, but the animals will only line up behind other animals that match in type or color. It’s a nice spatial, attribute-matching puzzle system with simple rules that even the youngest of kids can understand, but the puzzle book has a full range of difficulty levels, including expert challenges that will give adults a mental workout.

Snorkels is a two-player strategy game where each player controls a team of cute, colorful aliens with the goal of being the first to capture one of your opponent’s aliens. The capturing mechanism in Snorkels comes directly from the ancient Asian strategy game Go, which is widely regarded as the deepest strategy game ever devised (even deeper than Chess!). In fact, I created Snorkels primarily to be a “gateway game” to Go, which happens to be my favorite game. Snorkels is satisfying in its own right, but once you master Snorkels, you’ll find it a snap to learn and enjoy Go.

You recently said that the MEGSSS program, which is now part of the IMACS curriculum, gave you the logical thinking skills that enabled you to develop Chocolate Fix. Can you elaborate on that?

When creating the clue system for Chocolate Fix, I was heavily inspired by my experience with Book 1 of the Elements of Mathematics series, “Introductory Logic.” [Editor’s note: This material now forms the Logic for Mathematics I (LM1) curriculum at IMACS.] In a strong sense, each proof challenge in EM Book 1 is a kind of puzzle, and I wanted to capture that kind of thinking in Chocolate Fix. The partial grid clues are a form of disjunction, and the ability to put multiple constraints within one pattern are a kind of conjunction. (Gridworks also featured negative clues. We removed them from Chocolate Fix to simplify the system, but we hope to bring them back as part of the curriculum we’re developing.) When solving a challenging Chocolate Fix puzzle, you can expect to use Inference by Cases, Indirect Inference, and other techniques now taught in the LM1 course at IMACS.

Describe your career path from when you graduated from MEGSSS to your current work in puzzles and games and curriculum development. Who or what experiences influenced you along the way?

After MEGSSS, I went to Rice University, where I double-majored in Computer Science and Cognitive Sciences. From there, I programmed virtual reality simulations at NASA, and then got into the computer game industry, working at Sierra On-line and Rad Game Tools. These days, I’m primarily a stay-at-home dad, but I continue to dabble in puzzles and games when I have spare time.

With respect to puzzles and games, my biggest influence is my own childhood. I logged a lot of hours playing computer adventure games, solving puzzles in GAMES Magazine, and playing boardgames with friends. I was fortunate in college to find a group of friends with similar interests, and I ended up learning a lot about puzzle construction through our many conversations and brainstorming sessions about what worked and what didn’t. I try to create the kinds of things I would have enjoyed when I was in middle school.

If someone reading this thinks he or she has the next brilliant idea for a game or puzzle, what should he or she do next?

The beauty of the Internet age is that it is so easy to get your idea out there. Learn how to program so you can put together a mobile or Web app to showcase your idea.