An Introduction to Modular Addition

Consider a clock face such as the one shown below: 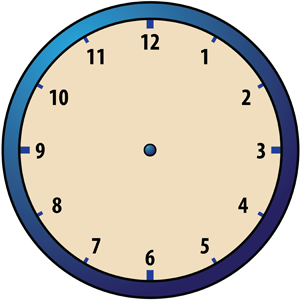 In ordinary addition the number 0 has this property. This suggests that it might be convenient to replace the “12” on our clock face by a “0” so that our clock face looks like this: 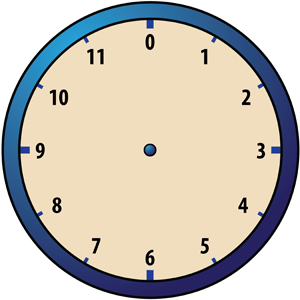 We have been calling +12 “Clock 12 addition” because it’s very closely related to the kind of adding you do on a real clock. The operation +12 is also called “addition modulo 12” or “addition mod 12” for short.

Now we’ll describe a game called “Clock 12” that two players, A and B, can play on a circular board. You’ll need a movable arrow for the hour hand so that your game board looks like the figure below. 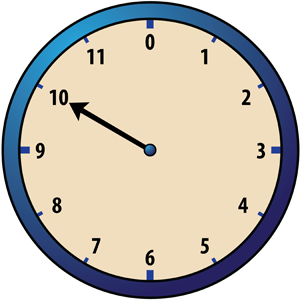 Player B makes a move in two stages: first by placing a checker of a second color on one of the unoccupied numbers, and then by placing a second checker of the same color in such a way that the following is true: The starting hour plus (mod 12) the number of hours corresponding to Player B’s first checker is equal to the time corresponding to Player B’s second checker. The arrow is then made to point at the number on which Player B’s second checker was placed, thus indicating the new hour. Player B then declares the new hour.

Example 2
Suppose Player A chooses 0. If Player B chooses 4, the first checker is placed on 4. In this case, 0 +12 4 = 4, and Player B already has a checker on 4. Therefore, there is no need to place a second checker on 4, and so Player B’s turn ends with the hour being 4 o’clock.

Example 3
Suppose Player A chooses 10 and Player B chooses 0. Then, since 10 o’clock plus 0 hours is 10 o’clock, Player B’s second checker ought to be placed on 10. However, Player A’s checker is already on 10. In this situation, Player B takes Player A’s checker and replaces it with one of his or her own. The hour hand, which was pointing to 10 before Player B’s move began, will not be changed. The hour is still 10 o’clock.

The players continue to alternate turns using rules described in the examples above. If, after completing his or her turn, a player leaves the board so that there are no more unoccupied numbers, then the game is over and the player with the most checkers on the clock wins!

What time is it? Time to take an IMACS class! Sign up for our free aptitude test. Play along with our weekly IMACS logic puzzles on Facebook.

Comments Off on An Introduction to Modular Addition