Are you interested in learning to play chess? Is your child? Teen chess champion and IMACS student, Rachel Gologorsky, shares her advice on how to get started. Read more about Rachel’s journey from curious toddler to 2011 US Girls Junior (U21) Chess Champion in her previous blog post.

It’s really easy to be good at chess if you start the right way and with the right foundation. That’s how my father taught me after my mom explained the object of the game and how to move the pieces. He taught me to first focus on the last, i.e., the endgame. If you know where you want to go, the rest becomes easier—it is just a matter of execution.

The endgame is the end stage of chess games, commonly defined as when there are fewer than six pieces on the board. There is so much to learn in endgames, but Jeremy Silman’s book, Silman’s Complete Endgame Course, is an excellent tool for learning all the endgame ideas one needs to know from beginner to master.

Focusing first on the endgame is helpful because it highlights how the pieces coordinate together. When there are so few pieces it’s easy, especially for a beginner, to see how each of her moves affects the opponent’s move and how that, in turn, affects her next move.

The first thing that beginners should learn in endgames is how to win, that is, how to put the opponent in checkmate. A checkmate, or “mate” for short, occurs when a king is under direct attack and cannot avoid being captured.

After I mastered the basic endgame checkmates (how to mate the opponent’s lone king with any of the following combinations: (1) king and queen, (2) king and two rooks, (3) king and rook, (4) king and two bishops, and (5) king, bishop, and knight), my father added another component to our program: tactics.

A tactic is a sequence of moves which limits the opponent’s options and may result in tangible material gain. Tactics occur in patterns—the move sequence may be different, but the overall idea is the same. There are many different kinds of tactic patterns, but all are built on the most basic “skeleton” patterns. Those are:

The fork: A fork occurs when a single piece attacks two pieces at once.

Indeed, every one of the above tactics relies on a double threat or a double attack, as it is most commonly called. That is the basic idea of every tactic played, whether the tactic is played by beginners or grandmasters (GM). Indeed, GM Yuri Averbakh, the oldest living GM in the world, stressed in his Chess Tactics for Advanced Players that “the double attack is in one form or the other is [sic] the basis of [even the] most intricate tactical operations.”

Learning and finding these elemental tactical patterns in positions is vital to a player’s development because doing so etches those patterns in the player’s mind. Once you own these patterns, you can recognize them in games. This allows you to turn lost games into winning ones and avoid turning winning games into lost ones.

You can also build on these patterns and combine them to create potent combinations that, over a sequence of moves, force your opponent at the conclusion to lose something. The sequence of moves could force a checkmate, or force the opponent to lose material (valuable pieces or pawns), or force the opponent to give up a strategic asset. Making use of tactics to build up a combination in which I give up all of my pieces but one—the one that forces mate—is beautiful. Those combinations hold an aesthetic value for me, and that makes them fun to see and even more fun to play.

My father always opened our tactics book last so that the end of our chess sessions was always the most fun. Today, however, free websites like Chess Tempo are becoming preferable to tactics books. Not only is there virtually no limit to how many tactical puzzles one can access, the tactical puzzles are chosen on a bell curve with consideration given to your rating. This way, the difficulty of the puzzles grows with your strength.

After I grasped the basic tactical patterns, my father added a completely new dimension to our sessions: strategy. This too, in a way, is working backwards because implementing strategy allows one to coordinate one’s pieces favorably. And when that happens, tactical strikes usually appear that make use of the positions of the pieces. 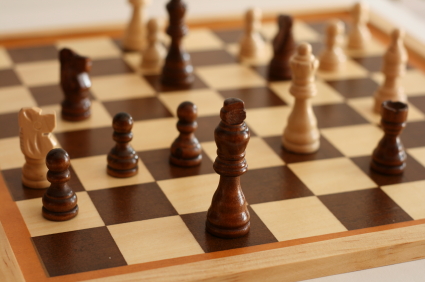 Strategy is the aspect of chess playing that is concerned with the evaluation of chess positions and the setting of goals and long-term plans for future play. Strategy is basically about playing better chess than your opponent and, in chess slang, is called “outplaying the opponent.” Jeremy Silman’s book, How to Reassess Your Chess, is a wonderful guide for learning a logical approach to strategy.

Strategy becomes more important as a player’s skills progress because the players are less likely to miss or be felled by a major tactical blow. Thus, decisive games rely more on which player can outplay his opponent. Outplaying an opponent can only be done with a good grasp of strategic concepts (I still haven’t figured out all of them), some of them being:

Strategy, if implemented correctly, can also be beautiful. Unlike flashy tactics, however, strategy is deep and cannot be spotted easily. Finding strategic ideas and implementing them gives a player a sense of confidence, appreciation of the game, and satisfaction because a win based on strategy means that your opponent didn’t make any mistakes at all—you just outplayed them!

Finally, my father turned his eye toward openings. An opening is how you start the game and usually lasts for around 10 moves or so. Openings are important in the sense that you want to start a chess game off on the right foot. One has to know openings in order not to lose the game right of the bat.

Nowadays, some of the more advanced players don’t spend much time on openings because they already know the general principles. The most advanced players (grandmasters), however, have to know openings deeply because the slightest inaccuracy will be capitalized on by their opponents. If you’re just starting out in tournament chess, you will most likely play beginners. But even they are becoming more and more “booked up” (i.e., know many opening variations). Although I don’t recommend studying openings too much as a beginner, I do recommend studying the main opening you play enough to know its major guiding idea. That way you can parry any prepared move logically and stay out of trouble.

There are those who will try to catch you in traps. Although better, logical play should and will eventually prevail, it’s useful to know common “trash trap” lines (i.e., a sequence of opening moves that sets a trap for you to fall into, but usually damages the position of the opponent who sets it). You will lose if you don’t see the “trash trap,” but if you know the trap, you will be able to counter it in such a way as to capitalize on your opponent’s damaged position.

(a) Open files (the squares running down a board)

(b) Open diagonals (the diagonals running across the board)

(c) Fluid (easily exchangeable) or absent center pawns (pawns on the e4/d4/e5/d5 squares; Click here for a complete explanation of the algebraic notation used in chess.)

(f) The first move played is the king’s pawn moving two squares forward. (In algebraic notation, the move would be expressed as 1.e4.)

These openings are educationally important because they show clearly many strategic elements, such as methods of:

• maneuvering pieces to better, active squares,
• controlling and guarding the center,
• counterattacking a center held by the opponent,
• gaining space, and
• creating and utilizing weaknesses.

Openings also highlight elements that have both strategic and tactical components, such as the importance of tempi (the interplay of time and moves), plans, and counterplans. These things are usually explained very well in most opening books. Chess Openings for White, Explained and its companion volume, Chess Openings For Black, Explained do an exceptionally good job of explaining opening ideas.

If one is serious about chess one should also play in rated USCF (United States Chess Federation) tournaments, if only to test the ideas out in action and to track progress. Since it’s often impractical to go to tournaments more often than once a month (unless there is a chess club nearby), I recommend either playing games in the meantime on the free ChessCube website, or buying a membership to the Internet Chess Club (ICC, $30 per year). In my experience, ICC has better interfaces, graphics, and is generally easier to navigate and understand than other chess servers. But the main point is that one has to play games often in order to track progress and improve.

As the player’s skills improve and s/he reaches a class D (1200-1400) tournament rating, hiring a private coach can be of an enormous help. My current coach, GM Alexander Shabalov, a four-time US chess champion, has been instrumental in analyzing my games, explaining new opening ideas to me, and pinpointing my weaknesses and misconceptions.

Finally, although Zermelo’s theorem in game theory proves that chess can be “solved” in the sense that the game’s final outcome can be forced, chess is still a game of so many possibilities that understanding its intricacies is a lifelong endeavor. I know that throughout my lifetime, my attempt to understand chess better will be a journey of constant learning. And, that is my goal: to learn all I can, in chess and in the world in general.

Editor’s Note: The IMACS Blog will return on Thursday, July 19th. If you’re celebrating during 4th of July weekend, have a happy and safe time!

Make IMACS a part of your strategy for academic success! Check out our online courses in gifted math and computer science Register for our free aptitude test. Play along with our weekly IMACS logic puzzles on Facebook.