The IMACS Blog reconnects with alumnus Mark Engelberg who recently released three new coding games through ThinkFun and Target. (Win an autographed copy of one of Mark's new games!) Mark's passion for computer science, math and logic led him to an award-winning career in puzzle and game design. He is also an active speaker in the Clojure programming language community. In this post, Mark talks with IMACS about what it was like to be a homeschool dad to two amazingly talented children who are now accomplished young adults in their own right. 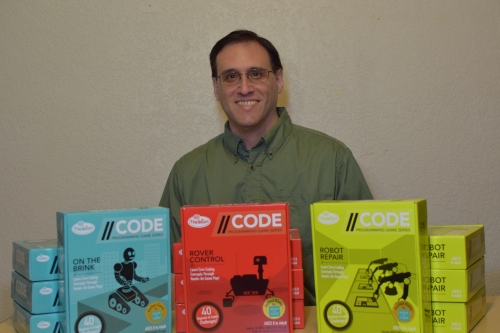 First, tell us about your new ThinkFun games.

Two years ago, I invented a programming puzzle game for ThinkFun called Code Master. Code Master was a commercial and award-winning success, so ThinkFun asked me to develop a new line of puzzle games, where each game would highlight a specific underlying principle of computer science. The new line of games is called the //CODE Programming Game Series. To design the games, I started from a list of concepts I wanted players to encounter, and kept trying out ideas and tinkering with the rules until I felt I had a combination of mechanisms that covered those concepts and was fun to play.

The first game in the series, On the Brink, is an introduction to procedural abstraction — the idea that we're not just writing programs to solve a one-off task, we're building components that solve multiple instances of an underlying problem, and then using those components to build higher-level components, and so on. The second game, Rover Control, focuses on the essential skill of stepping through programs in your head and visualizing the outcome, particularly with flow control constructs like if-then-else statements, while loops and for loops. The third game, Robot Repair, is all about Boolean logic. When developing Robot Repair, I leaned heavily on the material that I learned as a child in IMACS' Advanced Mathematical Logic courses. I think students in your Logic courses are really going to enjoy Robot Repair. Like their predecessor, Code Master, all three of the new games are "unplugged" computer science board games that come with a book of puzzles for solo or cooperative gameplay.

You are also a parent of two gifted children who are now ages 19 and 17. About how old were Alex and Molly when you first suspected that they were gifted? What were the signs?

I was a stay-at-home dad, and when Alex and Molly were toddlers, I taught them to read and write and gave them daily math lessons. Honestly, I mostly did those things to keep myself from getting bored; it was fun for me to feed their intellectual curiosity. My wife did the same with the kids when she was home from work. That was just our parenting style. We wanted the kids to have the opportunity to learn these core skills as soon as they were capable, and the easiest way to achieve that was to throw a lot of educational activities at them early, just to see what would stick. As it turned out, more of it stuck than we expected!

I didn't really have much to compare their development to until the day I went to Alex's kindergarten orientation. As the teacher explained what the students would be doing in the coming year, it dawned on me that my kids had already done those things. I realized that I had inadvertently given my kids a big jumpstart, and what I had been doing was working, so I might as well keep doing it. And that's how I ended up deciding to homeschool my kids.

Because I homeschooled my kids, the label "gifted" didn't really come into play. I never needed to get them tested, or prove anything to a school official. But it was clear to me that they had the capacity to learn faster than what our school system provides, so I set out to do my best to keep them challenged and allow them to fully develop their individual talents. 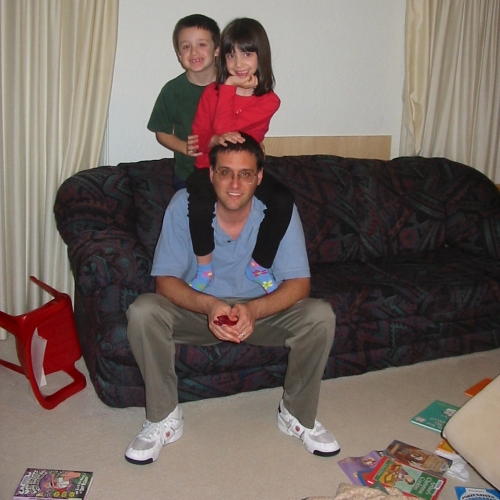 When Mark realized that his young children had already learned everything that was to be covered in kindergarten, he decided to homeschool them.

How did you feel when you knew for certain that they were gifted?

It felt like a tremendous responsibility to help them achieve their full potential, even more so because I was choosing to take on that responsibility myself rather than relying on the school system. If things didn't work out, I would have no one to blame but myself. It was a lot of pressure. I didn't really doubt my capability to teach them, but I knew it would be an enormous undertaking, one that would require the bulk of my time and attention for nearly 20 years. It was well worth it — I'm so proud of the young adults they've become — but I'm relieved to have reached the point where that responsibility is behind me rather than in front of me.

As you looked into ways to meet their educational needs, what did you discover?

One pleasant surprise was realizing that it isn't necessary to be an expert in everything in order to meet your kids' educational needs. In many cases, it's more about playing the role of an advocate, connecting them up with the right resources. I would track down private teachers, public school classes, homeschool co-op classes, other parents, books, videos, and websites for the areas I was less equipped to handle. I did my part for the homeschooling community by serving as a teacher of math and computer science for many other talented kids whose parents were not as adept at those particular subjects.

What were some of the programs, opportunities or approaches that you found helpful in making the most of their talents and interests?

One of the things that was really important to me was to make sure my kids had a strong foundation in math and computer science. Fortunately, I have the advantage that I learned the IMACS curriculum when I was in middle school and high school. This made it easy for me to teach these subjects because I'd already experienced first-hand what a top-tier math and CS education looks like. To duplicate that experience for my kids, I simply taught them using the same materials and techniques that I had learned at IMACS and in college. Those resources played a big role in giving me the confidence to homeschool.

What were some of the benefits and challenges of homeschooling? How did you deal with the challenges?

Another big challenge is that, even though my kids are close together in age, they were far enough apart that I couldn't do the same lessons with them. I always felt like I was struggling to give each of them the level of individual attention I wanted to give them. My solution was to make certain parts of the day relatively structured and leave the other parts of the day flexible so that I only needed to schedule the structured parts. For example, I might be doing structured math lessons with one child while the other was doing creative writing or watching an educational video, and then switch. 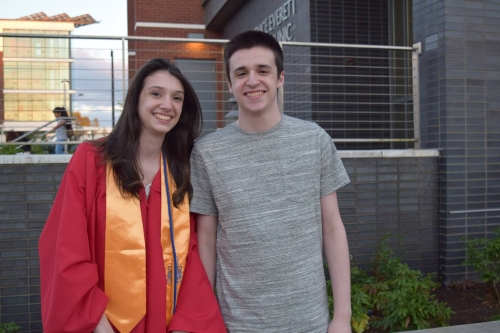 The kids are alright! Alex has been working full-time as a professional software engineer since he turned 16. At 17, Molly just entered college as a junior and plans to study theater stage management.

What were some other challenges you faced in parenting gifted children, and how did you deal with those?

Gifted children can be wildly asymmetric in their abilities, and wildly different from one another in terms of their talents and interests. It was a constant challenge to avoid getting impatient when one of my children would struggle with a concept that came naturally to the other. I had to keep reminding myself that it was totally normal for them to have different strengths and weaknesses.

How did being a gifted adult who was once a gifted child affect your educational and non-educational parenting choices?

This was especially helpful when my kids' interests dovetailed with my own. My son, for instance, developed a keen interest in programming, and thanks to my own background, I knew exactly what to do to support him in that interest. When my kids' interests and abilities diverged from mine, it was a lot tougher, and I ended up doing what any parent would do … seeking out people and resources that could help my kids develop their talents.

What are your fondest memories of raising Alex and Molly?

Probably my fondest memories are the many times we played board games together over the years. For those moments, instead of having a parent/child relationship, or a teacher/student relationship, we were just people playing games together and enjoying each other's company. I feel like at those moments, I really gained some insight into their character, and got a glimpse of what they would be like as adults. 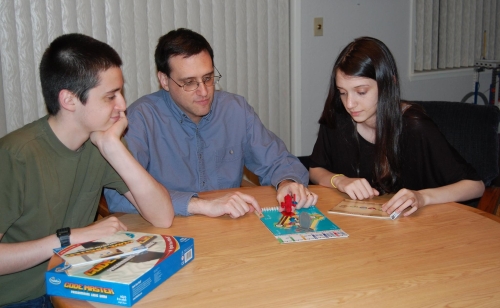 What are your hopes for them in the future?

My hope has always been for them to be good, caring, compassionate, independent, happy adults. The good news is … they already are. I'm done! Woohoo! 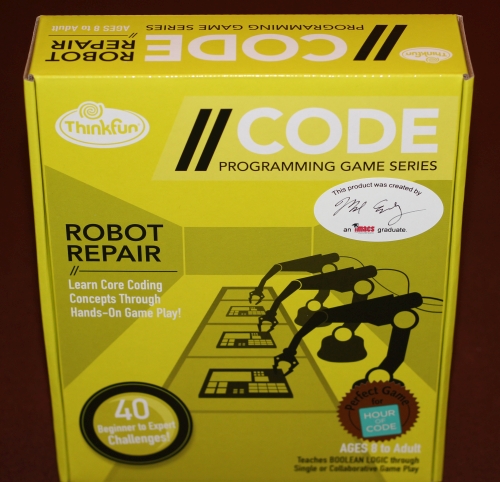 Take the EMF or eIMACS Aptitude Test for your chance to win an autographed copy of Robot Repair.
To learn more about the curricula that Mark studied as a middle and high school student, visit www.EMFmath.com and www.eIMACS.com.